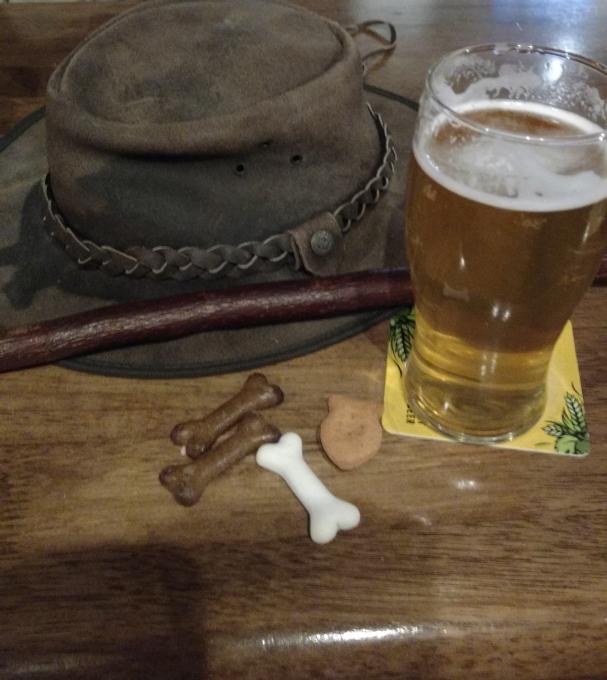 Modern Love from Castle Rock, must be the third time this week. Surprised it was still on at the Strat but the barman tells me that they have a lot of it. Strange name for a beer though.

Max raised one eyebrow. "Not so very strange" he said. " I think you will find it's a reference to the commodification of love in the contemporary epoch."

"I mean", said Max, "that love is now accepted to be transient, contingent and instrumentmental. As long as it brings status, happiness or wealth, as long as it feels fresh, as long as there are no greener pastures in prospect, love is supported, it's virtues extolled, it's longevity praised but should market conditions change then current loves will be discarded and new ones adopted."

"But what has that got to do with beer?"

"I believe" said Max, "that your current tipple is what Castle Rock call a 'seasonal beer?'"

"Brewed" continued Max, "to cash in on the current fashion for light citrussey pale ales and, that being so, Castle rock may cease production at the drop of a hat?"

"Well ok, I see where your going with this Max but aren't you being over cynical? The brewery would surely have to be extraordinarily contemptuous of it's audience to risk the name being interpretted in that way?"

We live" said Max rather laconically, "in an age when a very popular television programme requires producers, actors and viewers to conspire in the belief that a bunch of self obsessed people, desperately seeking attention through the media, paid to engage with each other on camera, are somehow falling in and out of love."

"Then you know full well that I don't either," said Max "unless you are suggesting that I have taken to turning on the box myself and selecting the channel."

"Well you did master opening the sitting room and bedroom doors."

"Is that why you changed the handles to door knobs?"

"I didn't know you'd noticed that."

"Remarkable. You are happy enought to discuss art, literature, philosophy and politics with me and you seem to think that I may have mastered a remote TV controller but you still think I'm too 'dumb' to notice the changing of door handles to ones that I can't grip."

"No offence Max, I mean purely in the technical sense."

"That, I think, only makes it worse. "You will find, I'm sure", said Max, "that most people, if not all, will think that sitting in a pub arguing politics with an 84 year 'dumb' animal is more than 'dumb'".

"I don't think we should be ageist about this Max."

"Your trying to divert attention" said Max "from your offensive use of language."

"I'm sorry Max but aren't you coming on a bit strong about this?"

"About which, calling me names, other my own of course, or the nature of Modern Love?"

"Chiefly about Modern Love, you must know I wouldn't want to offend the noble dog, man's best friend."

"Man's best friend? I'd have to spread myself pretty thinly for that."

"Is that why" said Max, "when you are putting the lead on, you call me a 'stupid animal'?"

"Only on almost every occasion. 'Stand still you stupid animal' is burned upon my ears."

"Oh, that's just the irritableness of an old man when your dancing before a walk Max, you know I don't really mean to hurt your feelings".

"H'mm" said Max. "People choose their own truths I suppose. If after centuries of trying to produce a bright beer that drops crystal clear in the barrel, people now choose to believe that something resembling exceptionally turgid washing up water..."

Max groaned. "If people decide" he said, "that drinking dish water is the way to go, then said dish water will be sold in quantity and probably at a premium price."

"Are you telling me Max that you favour something longer lasting, something with a history, something that requires continuous effort to deliver in peak condition, year after year, through all kinds of climatological, economic and political change and Max, that your love remains steadfast, loyal and true through the passing of the years?"

I was waxing lyrical now and I thought I felt the returning glow of affection from the faithful hound.

"I thought" said Max, "that we were discussing the impact of fashion and culture on the consumption of comestibles?" He raised a quizzical eyebrow.

"You may be thinking" said Max, "of Pandora's Box, and her penchant for beer from Wadworth."

I thought I detected a note of some sarcasm.

The other eyebrow was now raised.

"Remembered", said Max "or looked it up?"

"Then perhaps you may half remember that my response to the offer of a biscuit has been nothing if not consistent."

There was a long pause and Max laid his his head on the floor between his paws.