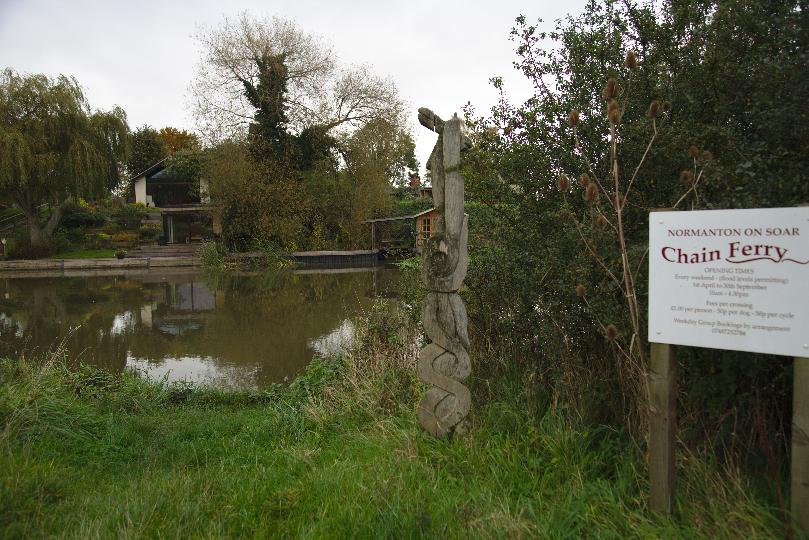 “Well it was a splendid walk down the Soar, wasn't it Max? Ogling the magnificant riverside mansions eh? Just a shame that we couldn't cross.”

I tried to press on.

“You must admit Max the day was much enhanced by visits to the ‘Rose and Crown’ in Zouch and ‘The King's Head’ in Sutton Bonington. we could have taken in ‘The Plough’ at Normanton on Soar too, had it not been for our little technical difficulties ...”

“Technical difficulties?” said Max, “Would that be failing to read the 'Nottinhamshire Walks' guide properly, or not studying the map carefully enough to spot that the river crossing was not in fact a foot bridge but a chain ferry?”

"Max, even had I known it was a ferry, far from being disheartened I would have relished the prospect. The problem was a technical one, ie. that the ferry closes for the winter. Had we only been a couple of weeks earlier we would have been able to cross with ease."

"There you go again" said Max, "persisting with what sounds ever so reasonable but actually diverges from reality significantly. What is this 'We couldn't cross'? That river, so called, is little more than a portly stream. I could have crossed easily, with or without a ferry, in fact if the ferry had been running I would have suggested you save your 50p to spend on dog biscuits. Dearie me, if you weren't so worried about getting wet I'm sure that even you could have swum across. It would take no more than half a dozen strokes."

I persisted in trying to keep the mood light. "It was a pleasant enough walk back to Zouch though Max and we were able to get in another visit to ‘The Rose and Crown.’

“It had it's compensations" said Max "Particularly after you abandoned the faithfull hound to fetch the car, on your own”.

"You appeared to be very tired Max, I did ask you if you wanted to come."

“I looked tired so you abandoned me under the table with a tray of eggs and a number of people of whom I knew nothing? If I was a little stiff it was surely a result of walking up and down the same stretch of river in the fruitless pursuit of a crossing for you.”

Max was sounding uncharacteristically grumpy. “They were very warm and friendly people Max, in a warm and friendly pub. I was confident that you would experience no trouble. I sorry you didn't like it I was thinking of going again soon and remedying the ommision of the Plough.”

Are you planning on swimming the river next time?" said Max.

"No no Max, I was just thinking of taking another route"

"Would that be the one in the ‘Nottinghamshire Walks’ guide perhaps?" said Max.

I chose to ignore the barb. "Yes I thought we could get another look at those houses in Sutton Bonington. You know I still live in hope that I might one day be acknowledged by my real parents and restored to my rightful inheritance."

"You do realise" said Max "that any new found parents would need to be over 600 years old?"

"Well it's not impossible, thats still under 90 in human years."

"Good grief," said Max, his head sinking between his paws, "I sometime wonder what world you live in, but perhaps we should go back.”

"Thankyou Max you admit then that it was as I said, 'a splendid walk'".

"I was thinking" said Max, of the generous people who gave me treats in 'The King's Head' and even more so of those that took it upon themselves to give me succour and comfort, not to mention dog biscuits, after you had abandonded me under the table in the 'Rose and Crown.'"