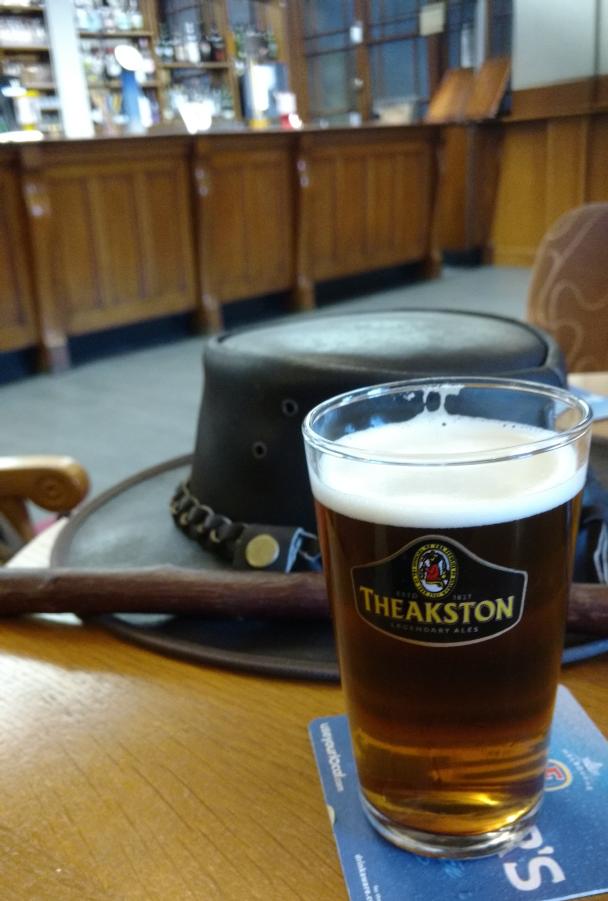 Theakstone's Old Peculiar in the Welbeck. That's a turn up for the books. Didn't even know we were allowed in here but yup, the bar's open to the public on a Sunday afternoon. Only available as a keg beer unfortunately but it is warm (the bar that is, not the beer), the staff are friendly and the place is empty. I've seldom seen Max so immediately comfortable.

"You left me outside", said Max.

"I wanted to check the place out first Max".

"And having found the place to your liking you then thought to bring me in?"

"Well sort of. It's a Masonic Lodge, Max. I did rather assume that there would not be a hope in hell of them agreeing to allow an elderly dyspeptic mongrel across their portals."

It was of course me that was experiencing one of my more dyspeptic days but you know, sometimes Max's sarcasm does get to me.

"Well we're both getting a little elderly you know Max."

"And you argued fiercly, I take it, that the 'elderley dyspeptic mongrels should be admitted?" said Max.

"Well, actually, one of the bar staff saw you outside and having established the connection between us, you and me that is Max, there wasn't a connection between me and the members of staff, unless of course you count customer and bar staff as being a connection... which I suppose it is in an absolutist sort of way... they um, they er, more or less insisted on me bringing you in."

"Did you reassure them then in respect of my 'dyspepsia'" said Max, now sounding more sardonic than ever.

"Well there really wasn't any need, they were so keen to welcome you to the Lodge and I'm sorry, I admit you are less irritable than I am."

"They weren't put off by my 'mongrel' status then?" said Max.

"Nor by mine Max, nor by mine." I said, trying to be placatory.

"I don't think Collie's feel the cold much Max. They have a double coat you know. The outer coat keeps off the snow and rain and the inner coat remains dry fluffy and warm." I said trying hard to evade Max's drift towards identity politics and the insinuation that there is some sort of class or status bound difference in the treatment of dogs.

"Really?" said Max and I was uncertain whether I should have inserted a question mark there or not. "Tell me, the honourable Pandora's Box of Tosari, why did you call her 'Suzie'?"

"I'm not sure why you are prepending ‘he honourable Max&rsqu, she wasn't titled or anything, nor was she a judge or an MP but Suzie's kennel name was a bit of mouthful and it would be more than a little embarassing shouting that lot across Bridgford Park."

"I see", said Max. "Rather than experience a little embarassment you felt it better to change the name she was given at birth?"

Come on Max you have to admit it would have been a rather cumbersome moniker."

"It couldn't have been shortened" said Max, "rather like mine was from Maximillian. 'Pandora' perhaps, or just 'Pan', 'Box' even, I fancy that might be a good name for a dog".

"I suppose your right but I didn't think of it and she just seemed to suit the name 'Suzie'" I said beginning to get irritated again.

"Is there really a difference Max?"

"You might perhaps think so if someone were to decide to change your name, willy nilly" said Max. "So 'Pan' was lumbered with a name that you liked and that you thought suited the dog? Rather like calling butlers 'James' or kitchen maids 'Lizzie' or 'Mabel' isn't it? Devaluing the individual, emphasing their status as being more akin to a chattle than that of a person (or dog) with their own unique and worthwhile identity?"

"Your a harsh critic Max and all this identity politics stuff hadn't taken off at the time. Anyway I'm surprised your so concerned, I thought you didn't have much time for 'posh' dogs of the female gender".

"No" said Max rather vaguely "I'm not sure I like posh bars either."

"Why ever not Max? It's warm and friendly enough despite the rather grand architecture."

"Warm and friendly it might well be," said Max "but unless I'm much mistaken they do not appear to have dog treats behind the bar."

"Perhaps" said Max after a very long pause, "we might do better in the carvery."

"Now Max I am bloody sure thay will not let..."

"Dogs Max, I'm sure they won't let dogs, of any kind, in the carvery nor will they have dog treats."

"Oh I don't know." said Max "I'm sure that as an establishment that cares about animals tethered outside in the damp and cold, they might run to a doggie bag."