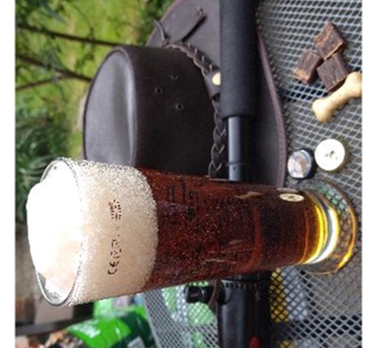 Nowhere near the quality of the 'Hoppy Hen', but it's the last bottle. There has been, I fear, some serious procrastination in the procurement process.

"I should demand a public enquiry." said Max.

"Do you think so Max? Should there be an august committee set up, led by some extraordinarily well heeled public notary, that could firstly, establish the need for a full enquiry?"

"No." said Max rather emphatically.

"You think the failure to place timely orders for ale is a matter for frivolity Max? I mean it's not like ordering groceries. There is no difficulty in getting on web sites that are prepared to deliver within two or three days. There can be no excuse. Its not like they're flying the stuff in from Turkey only to find that Best Bitter has been labled as Cream Stout."

"Max you know full well I do not."

"Then why in the name of all that is Holy, would you order Cream Stout?"

"I wouldn't. I mean I haven't. I was just giving an example of what might happen, like if you ordered gowns and face masks were delivered."

"I thought there was a shortage of face masks" said Max. "Isn't that why they don't work? I mean they work for doctors and nurses and people like that, and members of the public in other countries, they might even work for care workers to a degree, but not for the British public."

"Not as long as we don't have any they don't. Imagine what would happen if they did work and the general public were demanding supplies. The demand for masks that don't work, might take them away from NHS workers, for whom they do work. Although they might not work in the NHS either if the shortage became really chronic."

"Do you think they are effective then Max.?"

"What do you mean?" said Max."The masks, the government or the best possible scientists."

"The masks Max, I meant the masks."

"What I think is neither here nor there"." said Max. I am content to let the government decide that face masks are inefffective today and to make the wearing of them compulsory tomorrow, in either event I doubt I shall be wearing one."

"I like to think" said Max, "that I have my own special way of not wearing face masks that owes nothing at all to the way that it is done by Mr Trump."

"My boy thinks that the good citizens of Bridgford are so socially insecure that they fear that they may encounter embarrassment should they wear masks without government instruction so to do and worry that they could find themselves to be part of an exquisite minority."

"Your boy may well be right. I notice that you have stopped wearing your Darth Vader respirator when out in public spaces." said Max.

"I've re-evaluated the situation Max in the light of the best possible scientific advice and anyway I don't really think of myself as a West Bridgfordian."

"Well that at least is a perspective you share with the majority of residents."

"What? The majority don't think of themselves as bona fide 'West Bridgfordians?"

"That is not" said Max rather dryly, "what I said."

Unsure whether to feel slighted or not, I pressed on.

"It's odd is it not Max? The extent to which people want the Government to decide. The pent up demand for a totalitarian state which decides for each of them what they should do, where they should go, who they should see, where, when and for how long, is, don't you find, so very dissappointing?"

"I find it so Max. Of course they don't stop at wanting these decisions to be applied to themselves, they are more than willing to obey, even go the extra mile to apply restrictions to themselves and others, that exceed the edicts of government but what they really want is draconian punishments. Punishments that bring dissenters to heel. They want teenage cyclists and parent huggers and solitude seekers, publically exposed and humiliated. God and the police forbid that anyone armed with such facts as are available and knowledge of their own circumstances, should make any decisions regarding their own welfare.... particularly if they are over 70."

"But", said Max, "surely when the demand comes from the well heeled and educated, those whose hands are dangerously close to the levers of power, it is to be expected. They don't actually want the government deciding these things for them, they are wise enough to know that it is only the common man that needs disciplinary control over his life, for otherwise such people are surely likely to run amuck.

It is perfectly reasonable for Chief Medical Officers to visit their second homes or for the best possible scientific advisers to have their paramours around, married or not, in order to meet their sexual proclivities. They are, after all is said and done, more than able to evaluate the real risks for themselves. It's all them others that's the problem".

"People like you" said Max, "People who cannot be left to decide on their own whether or no they are West Bridgfordians."

"I'm not rising to the bait Max. I don't have any beef with the powerful and privileged in this instance, they are what they are and will behave in their own best interest as you might expect."

"Perhaps your concern is with the fearful lumpen borgoisie, reporting their neighbours for leaving their houses twice in one day?" sugggested Max.

"No, it's not them either, it is the putative left that worries me Max. It makes life so difficult for anyone aspiring to socialist evangelism. What we need, after the debacle of Corbyn's failure to seize the bull by horn over Europe, is an attractive, robust, muscular socialism, not frightened little lambs endlessly bleating for someone to make them forever safe."

"Not a point of view that's going to win you anything but approbium amongst the twitterati" said Max.

"But the hypocracy is so blatant Max. It drives me to distraction. I listened to someone on 'Any Answers' only yesterday getting in a terrible state about primary school children going back to the classroom. Bizzarrely the presenter did hint for once that the caller seemed to be perfectly happy with NHS workers, care workers, bus drivers, shop assistants, warehouse men, the police et al, placing themselves at risk to provide for his needs but he seemed so much more concerned when it affected his personal level of risk. That of course was different he opined, he wasn't concerned for himself, he was worried for the children for sure but what people needed to realise he said, was that these children had families to whom they might take the virus back."

"Well he is right," said Max, "It's a noticeable trait of the species that fear only grips those directly under threat. Many of you can be quite gung-ho about sending your proxies into battle. I suppose part of his point was that doctors, nurses, cleaners, carers, shop assistants etc don't have children."

"They don't" said Max and if a dog can chortle then I swear he did so, although for what reason I couldn't tell.

"And you think this 'bleating' is predominantly coming from the left?" said Max.

"I do and while some of it is just a misguided attempt to gain political ground on those struggling to preserve their careers through this crisis, much of it comes from people who genuinely believe that the state can and should protect them from all risk."

"Because ordinary working people who know they are little more than canon fodder, just turn away from what appears to them as as weak kneed, wishy washy liberals hiding behind their own front doors and imbibing the wine from bottles that are delivered, by the case, while relaxing in their back gardens and enjoying the spring sunshine."

"Unfair. Only my boy would call me a wishy washy liberal. And I'm drinking beer, not wine."

"You don't think the middle classes should be protected?" said Max.

"I think they should be properly appraised of current thinking regarding the virus, given the government's interpretation of such information as they have to hand and most strongly advised as to the appropriate action, then I think they should gird their loins and make a decision"

"With the left doing what?"

"With the left focussing on a single clear message 'Join your trades union.'"

"Then that's where the activists need to be, inside Amazon warehouses, organising."

"I do." said Max, "And what I see, is that you have now finished that bottle of Green King and the Belhaven 'Twisted Thistle' yet the dog treats remain where they were at the outset. On the table."