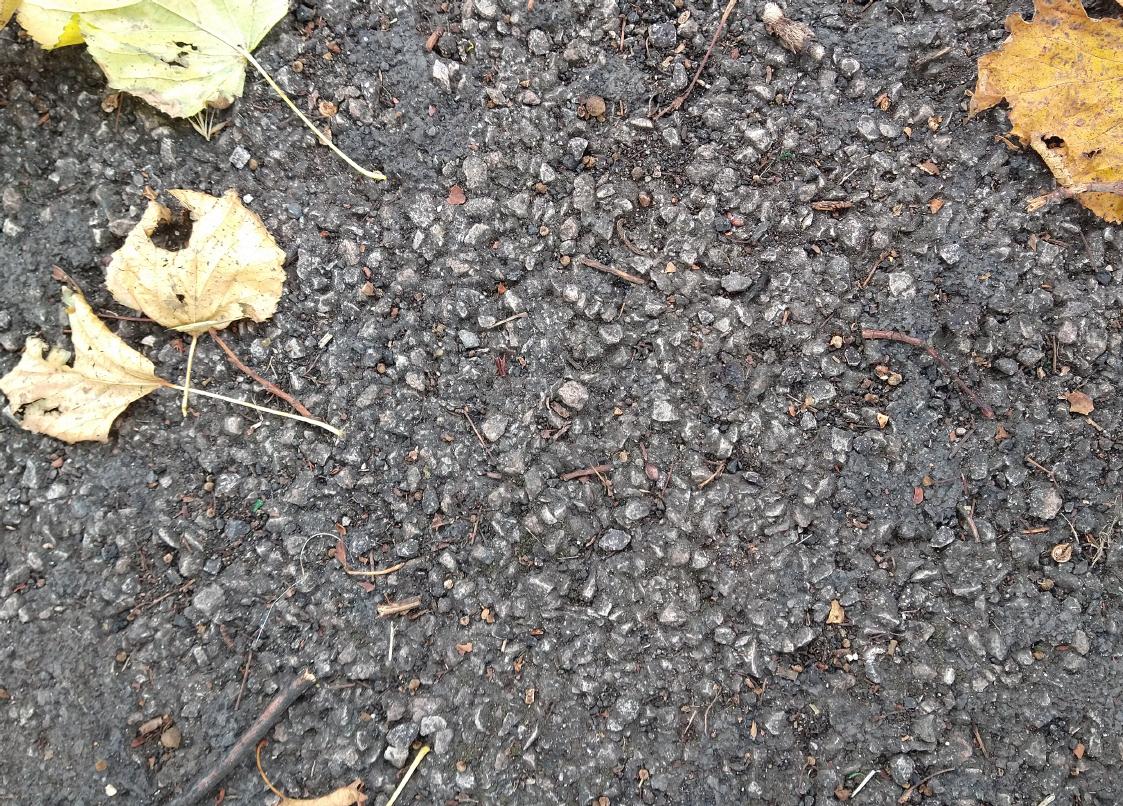 The asphalt looked very cold and black. It had crumbled slightly with age and wear and as he came closer tp the surface he could see glistening drops of water and tiny white fragments of stone. What were they? Granite perhaps or quartz? Whatever they were, they looked sharp and forbidding.

He looked at his hands, they looked white, palid colder even than the asphalt. “This is going to hurt.” he thought and he tried momentarily to pull his hands away but then thought about what then might hit the ground first and decided that on balance it might be better to take the impact on his hands and arms. The thinking time expired.

He felt the jolt of pain richochetting around his body and he thought briefly of an Ian Fleming novel he had read, perhaps fifty years ago, about how the impact of a high velocity weapon creates a shock wave that kills before the bullet penetrates a vital organ. Its a funny thing falling, pain is felt in places that have no contact with ground.

He watched as his hands ground across the asphalt, and thought again of how much this was going to hurt. He felt the sharp blow on his breast bone as the heart monitor he was wearing fronted the impact of his chest on the ground. He wondered if the monitor would turn itself off. Two taps to turn it off though and this was only one but then just stopping running was supposed to cause a temporary pause in monitoring, so surely it would have stopped anyway, assuming it wasn’t broken.

The forward motion finally exhausted, he slumped on the pavement and tried to recover his sense of equilibrium. The pain in his hands was outplayed for a while by the generalised pain around his body. He remembered how at the age of thirty five he had fallen over in the Market Square and had been shocked to find that there was no longer any bounce, the resilience of youth was already gone at thirty five, now he was approaching seventy and he no longer expected the bounce.

He lay for a while, feeling the waves of pain and speculating on what it was going to be like when he tried to get up.

As the general shock subsided he began to wonder what this might mean for getting home. He had to get up. If he lay there much longer someone was bound to come to his aid, making solicitous enquiries, helping him to his feet, offering to call for assistance, that he couldn’t bear, he had to get up.

He rolled a little on to his side and painfully pushed himself to his feet becoming as he did so much more aware of the pain in the heel of his hands, in his fingers and his knees. He checked his phone. The heart monitor was still running and the workout had not been paused, ”ironic” he thought. “The bloody thing usually pauses at a simple stumble” not that it mattered, any thought of setting a time was now ridiculous.

His knees were both black, encrusted with asphalt and chippings but it seemed best to leave well alone and not to try and brush them off. His right hand was covered in blood, there appeared to be broad rivulets that were drying quickly, he was puzzled that the blood was clotting so quickly, surely the asprin should militate against that. His hand looked like that of a knife murderer. “Go get some water, And wash this filthy witness from your hand. Why did you bring these daggers from the place?”

He walked for a couple of hundred yards, but by then he was convinced that everything was still working and felt that he could perhaps jog, he didn¿t want to try running again, but he could jog and just being warmer he was sure would improve things.

Back home under a warm shower he was optimistic that the damage was superficial and that he would be playing tennis in the morning. The first indication that his assessment was flawed was the difficulty he had in bending his right knee to climb the stairs.