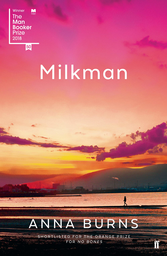 A brilliant invocation of life for an attractive 18 year old girl in Northern Island during the troubles.

In a narrow minded sectarian, rumour driven community, in which people are mostly cowed by the irrational brutality of renouncers, defenders and the state but occasionally capable of astonishing bravery, Middle Sister tries to keep her head down and out of politics but is harassed by neighbours, the renouncers, the state and her ma.

Stalked by a senior renouncer who is able to threaten everyone around her with impunity, Middle Sister, is almost equal to the task of rejecting him until she discovers her maybe boyfriend is in an active homosexual relationship with his delusional tenant. Middle sister finally gives in to "whats the point" and gets in to Milkman's van but after driving her home and making it clear he expects to completely control her from then on, Milkman is assassinated by the British Army following 5 attempts in which the wrong person, including the real milkman, was killed or maimed.

The story encompasses many murders, political, private and psychotic, fatal accidents,and punishment beatings by paramilitaries and the community, including women in a Ladies toilet outraged at male intrusion. Victims become victims for crimes against convention both real and imagined but there is little build up and no tension generated by the narrative. There is a sense toward the end indeed that nothing has happened, which rams home I think the point that this then, in that place, was normal. This was everyday life both for the community and Middle Sister.

Skimming the reviews of Milkman it is quickly apparent that it generated a great deal of tosh from the literati, from Dwight Garner in the New York Times who wrote that it was " ...interminable" and that he "would not recommend it to anyone I liked." to A. N. Devers in the Los Angeles Times who bizarrely believes that criticism of the book's style is "gendered" and that “Milkman’s critical reception is a little too much like subliminally delivered advice women receive throughout life to dumb themselves down to be better liked by the masses. Men and 'difficult' books by men don’t receive this criticism."

The style of authorship is, to best of my knowledge, unique and is, at times, difficult but not I think excessively so. Many I'm sure will be put off and quite legitimately so but the genius of the work is that for those who, like me, "enjoyed" Milkman is that once finished it is hard, if not impossible, to think of it being written any other way.