A Journal of the Year of the Plague 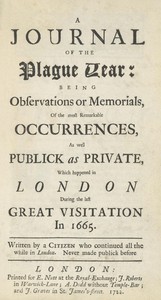 A Journal of the Plague Year. An astonishing book. Accurate in almost every detail, this "novel" by Daniel Defoe, who was just 5 years old during the Great Plague of London, was probably based on the journal kept by his uncle Henry Foe. A remarkable analogue of events in the UK over the last 5 months the book demonstrates that we have learned almost nothing in the last 300 hundred years. The complacency at the outset, the tendency to self delusion, the paucity of the science when faced with something "new", the learning of the means of transmission, the shutting down of the economy, the need for financial aid, the requirement for workers to keep on providing services, the escape to the country, the need for quarantine, the difficulty in providing inhumation, the absence of sufficient hospitals, the employment of lockdown, the prospect of the disease returning as the economy opens up, its all there, in great detail, one wonders if our scientists ever thought to read the thing.

One thing that did puzzle me was that I had been led to believe at school and have been reminded many times since, that the Black Death, as it has been called since Victorian times, was caused by Bubonic Plague and spread by rats carrying fleas. This clearly did not fit with Defoe's account and he specifically rubbishes the notion that the 1666 Great Fire of London put pay to the disease. Bubonic plague does not fit well either with the experience at Eyam. So I did a little research and found an article in the New Scientist reviewing the idea in the light of a book by Scott and Duncan that challenges that common knowledge. New Scientist found that many "experts" continued in their intransigent belief and did not trouble to read the book (Biology of Plagues" I mean, not "A Journal of the Plague Year", although I suspect the lessons of them both are identical). This was back in 2001. I suspect the un-critical acceptance of the Bubonic plague theory continues apace with a common reliance on Wikipedia which remains assertive on the bubonic plague theory (don't get me wrong I'm an advocate and subscriber to Wikipedia).

It would seem to me that anyone reading Defoe's book would be hard pressed to believe other than that the black death was spread by human contagion and that it was in fact viral. The lessons were there for all of us to learn, might be too late now but a worthwhile read never the less.