Five Run Away Together. - Enid Blyton 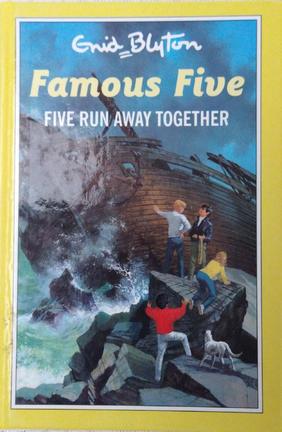 A ripping, if rather unlikely yarn. Love the way Blyton avoids mentioning any of the five's ages or the breed of dog. I always thought Timmy was a small terrier but in this story it's emphasised that he's a big dog, this I think because he has to be very threatening in the story. Wikipedia asserts that he's a large brown dog but the front cover shows him as a white mutt of some sort, while in the inside illustration he appears to be a collie cross.

The story was published in 1944 and this was an age when:

The last may be of some small reassurance when a terrified but essentially innocent Edgar, who is also probably around thirteen years old, is held captive for the day under threat of being mauled by the dog Timmy and then incarcerated overnight in an unlit, underground dungeon in order to teach his parents a lesson.

In my naive 20th century, flower power way, I fully expected, almost to the end, that the Five would recognise that Edgar was the socio-pyschological victim of bad parenting, and that he would be redeemed and allowed to join in the adventures of the daring and morally upright middle class children. It was not to be however and as his parents would undoubtely face incarcation for their crimes of kidnap and theft, I strongly suspect Edgar ended up under the brutal and deletious regime of a local authority childrens home. Max of course pointed out that even had Edgar been sent to a care home I have no evidence to suggest that it would be anything less than caring and educative and that it is perfectly possible that he emerged from his teenage years a well rounded character, who was able to assist his reformed parents in their later years. But that of course would be another story.