After the privations of last week's walk through the Skylarks Wildlife Reserve I thought we'd try something more urban and trace the childhood route through the Forest recreation ground and the Arboretum. 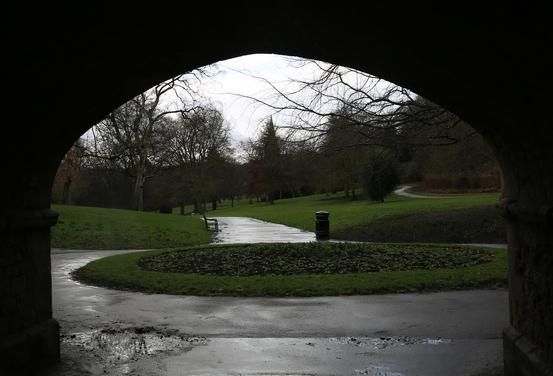 Putting aside the biting west wind, particularly along the ridge at Forest Road, the rain, hail and snow, it was all in all an interesting and educational stroll of about 41/2 miles

Not that we could entirely put aside the biting wind because as we soon learned, there used to be a row of windmills along that Forest Road ridge overlooking the racecourse below, and the reason for the choice of location was clear. Most instructional. Experiential education at it's best!

Slightly off route, due to the gap of sixty odd years and a flaky memory, we went by way of Balmoral Road and Arboretum Street and so were able to see  in the Nottingham High School grounds the monument to those Boys who, being made sufficiently of the right stuff, were never to make it to full manhood, choosing rather to sacrifice their lives for King and Country thus ennobling the traditions they received at the school. Well I never did!

I did not  know, or least did not remember, that the bell in the tower at the Arboretum was stolen from a Chinese temple at Canton during the opium wars rather then having been taken, along with the canon, from Russia.

Nottingham City Council has saved itself further embarrassment regarding the bell by giving the original to a Leicestershire regiment and having it replaced with a copy. I can't help feeling that it might be sensible to give it back to the Chinese before they decide to come and get it.

I did remember however that two of the said canon were captured at Sevastopol in the Crimean war. (Well to be accurate I remembered Sebastopol as is carved ont o the monument, but it seems we're not supposed to call it that any more and Sebastopol now throws up a spelling error everywhere.)

I did not know that the Arboretum was the first ever Nottingham park, part of a job lot to compensate the burgesses and free holders of Nottingham for the loss of recreational amenity due to the 1845 Enclosures Act. I suppose that the hoi poloi had neither time nor amenity for recreation so were not in need of compensation. Surprised that after 61 years I still knew the layout of the park quite well, I discovered that this is down to a preservation order (regarding the park, not my memory) which hopefully will continue to prevent the kind of desecration being perpetrated at Woodthorpe Grange, although it might be best not to count on it. Even the aviary is still there and I was telling Rahel of the great talking macaw that fascinated us so as children when we came across the tribute to "Cocky", not a macaw at all but a Cockatoo, who died at the age of 114 in 1968. Bizarrely the shrine to Cocky is housed in cage at the wrong end of the aviary (is it not?)

I had no memories at all of the tunnel under Addison Road nor of the statue of the Chartist leader Feargus O'Connor. Thought from the inscription that Feargus was just a local MP but directed by my good friend Sue Jackson I have done a little reading, particularly of Wikipedia. I discovered what a fierce and popular advocate of working class rights the man was. Over 40,000 turned up for his funeral. He fought hard to establish a National Land Company and to pass the People's Charter raising over 6 million signatures for a petition. The establishment having previously jailed Feargus for 18 months declared the petition invalid, the National Land Company illegal and voted down the Peoples Charter.

The gatehouse tea room iwas a joy. Beautiful, cosy and warm. I was dubious about going in at first as I didn't want to leave Max out in the cold but as Rahel was more frozen than me and was more victim to the public toilets being locked, we went in for a warm and a cup of tea. As we sat by the shuttered windows Rahel noticed the dog bowls under the high chairs. On checking I was told that dogs were most welcome. Went to fetch Max and only then saw the sign by the doorway saying that dogs are welcome. Duh!

The return route up Waverley street  meant that we found a monument, described as "nearby" when opposite the Girls High School which earlier seemed to have gone missing. This, another tribute to British Imperialism in the form of a Boer War monument. More careless than those from the Nottingham High School, these lads "lost" their lives while nobly performing their duty.